After completing his four-year tour in the Navy, Dad flew his young family from Honolulu to Dallas.  He took up a job as a security guard that provided a meager income while he attended studies at Dallas Theological Seminary (DTS).  My parents and my brother lived in a rather run-down apartment complex that was undergoing renovation.  The buildings were two stories tall and shaped into a horseshoe surrounding a grassy courtyard.  Four large trees provided shade during the hot, humid Texas summers and my brother would go out and play among them in what he called “the forest.”  A group of gypsies were squatting in several of the apartments across the courtyard of the complex.  The manager, who was also a student at DTS and a former bar bouncer, asked my parents to pray while he confronted them and asked them to vacate.  When it came time, my parents watched and prayed from the porch as the manager knocked on the door.  The leader of the group, a wizened older man appeared. He scowled at the manager’s request to leave and it looked for a moment as if a fight might break out.  But suddenly, the old man’s visage changed; he shook his head and agreed to go.  My parents watched in amazement as the group began to pile bags, chickens and even a rocking chair into their cars.  Only later did my parents discover the cause of their hasty departure.  A Mexican mariachi player living above their apartment had overheard their conversation with the manager, and decided to help. Leaning against the balcony, his rifle pointed in the direction of the confrontation, he assured the gypsy that it was time to move on.  Mom said “God, it seems, works in many ways.”

In the following years, their lives were constrained between work and seminary.  Dad worked nights, slept for a few hours, attended classes and studied in endless repetition.  While other seminary wives complained, Mom was content with Dad just being home.  During the time that Dad studied at DTS, Mom took classes as well.  The seminary offered non-tuition classes for the wives at the seminary and she also met to talk with the chaplain’s wife over coffee.  My Mom’s time was limited however, because she soon had two young children to take care of following the birth of my sister.  Mom would load my sister in the stroller, my brother positioned at the rear, and walk with their cocker spaniel a half mile or so to see Dad during work.  Sears sold popcorn at the time and they would often buy a bag to share during his break.

Mom and Dad’s young family lived modestly, but family and friends helped out as well.  Once a month Mom’s uncle and aunt would drop by with meat, fish from the lake and pounds of freshly harvested zucchini from their garden.  Since it was almost all they had, Mom made zucchini bread, zucchini casserole, zucchini baked, boiled and fried.  They ate so much squash “it was almost hard to look at one later,” she said, but it kept them going.  People at their church were generous, too. Mrs. Ma, an older Chinese woman, doted on Ruth, giving her red envelopes stuffed with bills on Chinese holidays. The Shins, a Korean family also in mission work, offered to babysit while Mom and Dad studied. Their two sons taught Josh and Ruth how to eat with chopsticks and introduced them to many Korean foods.  Through it all, God was building their faith.  Before his birthday, for instance, my brother prayed for cowboy pajamas.  Not a week later, without a world being said, a package arrived from his Aunt with cowboy pajamas and a set of cowboy guns!

The C&MA church in north Dallas was a thirty-minute drive from the apartments but full of international, missions-minded friends.  The church had been praying for a new piano bench in the sanctuary and a paved parking lot.  God answered both requests in one fell swoop with a spring tornado.  Spinning down just on the church, it collapsed an outer wall into the sanctuary, destroying the old piano bench in the process.  With the insurance money and donations from the community after front-page publicity, the church was able to replace the piano bench and pave the parking lot.  But God was not only tearing down walls to buildings, but to hearts as well.  While the building of the church was still in ruins, a group of newly immigrated Hmong and Lao refuges arrived at the church.  Outnumbering the members of the church, these Hmong families were destitute, wearing flip-flops in the snow and wrapping their babies in tea towels.  The members of the church sprang into action.  Some asked local businesses for donations while others scoured thrift shops for food and clothing.  Realizing that these newcomers were woefully ignorant of American life, Mom and Dad offered to teach them everyday skills.  They showed them how to use their heaters for warmth rather than an open oven and showed them how to use American toilets.  They intervened when five year olds were left in charge of their infant siblings.  Mom and Dad crammed their small apartment with curious parents and kids and taught cooking classes showing them what the packages looked like in an American grocery store and how to cook simple meals.  Instead of God sending my parents to the mission field, God brought the mission field to them.

After graduation from DTS with a four year Masters in Theology, Dad had to complete two years of pastoral work before being sent abroad as a missionary.  Mom said, “perhaps the biggest part of our preparation for ministry came in what we call the Oklahoma School of Faith.”  The C&MA district superintended asked them to consider a little congregation in Stillwater, Oklahoma even though it was small and could only offer a meager income.  Some of Dad’s classmates at DTS had refused to serve in smaller churches as they were beneath their “socio-economic level” and some of Mom’s relatives gave Dad a hard time telling him that “he had enough brains to put beans on the table without begging.”  But there was a calling from God to go there, at least just to take a look.  Walking into the church was a shock—roaches filled the church basement, parts of the building were in disrepair and the parsonage was tiny.  Mom cried all that evening, realizing the conditions and state of poverty they would be choosing for their family.  But the people were warm and friendly, and gradually, God poured out His love for them and they recognized that this was the place God had chosen.  God had gripped my parents’ hearts and given them His love for those people.

While the congregation in Stillwater was small, its members were the “salt of the earth” and our family learned much from them about perseverance, friendship and contentment in simplicity. They were willing to work hard, rolling up their sleeves as Dad repaired the leaky church roof and giving of their time and money to add on to the parsonage. A coup 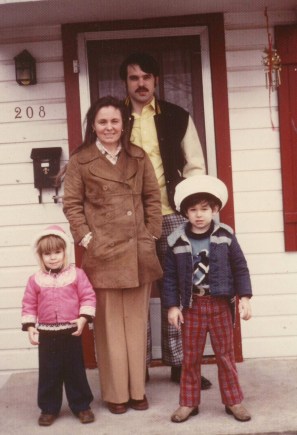 le from DTS serving at Oklahoma State University with the Navigators also helped, providing rich fellowship and encouraging students to attend the church. As the church grew, Dad’s gifts in teaching and pastoral work were confirmed and he took heart. Mom was busy in her sphere, too, learning to be a pastor’s wife. Whether leading Bible studies or teaching Five Day clubs for children, she learned to lean on the Lord for His strength and joy. Sometimes there was pain in the process; Mom miscarried a third child after tripping on the sidewalk while carrying groceries for an older woman in the church. This prompted Mom and Dad to pray for another child—and I arrived as the answer to their prayers. Sometimes my Dad had to be both father and pastor, excusing himself from the pulpit one Sunday evening to discipline my brother for misbehaving in church.  And always, there were people in our home being counselled, comforted or fed.  Summarizing their experience at the Oklahoma church, Mom said “words fail us to describe how much we learned about God’s goodness there; the day we were totally out of food a farmer appeared bringing fresh bread, vegetables and meat. A check for the bill we could not pay mysteriously appeared on David’s desk one Sunday the day before it was due, for the exact amount! And when I was pregnant with you the OBGYN offered his services for free! Because we were obedient, what appeared to many be a foolish gamble turned out to be one of the greatest experiences with God we could have ever known.”

Although Mom and Dad had studied in Europe, their time in Hawaii and then Dallas shifted their hearts increasingly toward Asia. Expecting an assignment to either Taiwan or Hong Kong, Dad started Mandarin classes at Oklahoma State University. While mom was still in the hospital after giving birth to me, Dad received a call from C&MA headquarters. They were considering sending missionaries to Korea, at the request of the Holiness church, and asked if they would be willing to go. Mom and Dad spent time in prayer, but also looked back, remembering the Shins, a Korean family that had helped them in Dallas. God, they found, always went before. He faithfully provided contacts for the future in the present, so that all along the way, by looking to their past they could recognize His leading. Thus, looking to their past, with a sense of God’s approval for their decision, Mom and Dad agreed by faith to go to Korea.

After three years of pastoral service in Stillwater, Dad was nearing the end of the process to become a missionary. It had started with a demanding oral interview for ordination. He then had to have recommendations from the District Superintendent and other ministers in the Southwestern District. Then there were psychological tests and physicals. After clearing through all of the application process and paperwork, Mom and Dad were accepted into the C&MA as missionaries. The last hurdle was the required linguistics training at the Toronto Institute of Linguistics. So, at the age of one and a half, I got the first stamp on my passport traveling into Canada. Mom and Dad were given tests in sound discrimination and phonetic training and were compared to the difficulty of the language they would be working in. Korean was rated as one of the most difficult languages for native English speakers, but both Mom and Dad scored high in discrimination and were told that they had the ability to learn Korean. The language training was an interesting and intensive program and they found the training immensely helpful. It was also at language training that we spent time with the Stimmels, another family that would be going with us to Korea.  Upon completion of their training, Mom and Dad returned to pack up what few belongings were going to be taken to South Korea… and off we went.

Thanks for following along! If you want to read other stories as part of this series, a full list can be found here: Child in a Foreign Land.  If you are interested in following along, we have links for e-mails, Facebook, WordPress and YouTube on the sidebar of the website.  If you want to share a link to this story/video, simply choose one of the buttons below this post.

joel Writer about growing up overseas @ www.adivergentlife.com Traveler of Oregon and beyond @ www.divergentexplorers.com
Published February 2, 2016March 7, 2017