Last year when we purchased our new home we were aware of a problem with the backyard.   The yard had two levels, and while the upper level was normally firm and dry, the bottom level was a soggy mess.  Even in the home realty photos, you could see

lines running down the yard where the lawnmower wheels had sunk deep into the soil.  When we first purchased the home we were heading into summertime and our focus was on a few high priority repairs, so we decided to leave the yard as a project for the next year.  Going through fall and into the winter rains, we watched as the backyard once again became a soggy mess.  When heavy rains came through, the water would flood the yard, drain across our patio and spill down our driveway – a less than ideal scenario.  Given the appearance of gravel lining the patio and several clean out drains, I was aware that there was a French drain present, albeit not functioning.  As I performed an investigatory dig of the drain, I found that there was indeed a pipe, but drainage fabric had never been installed so the gravel had been filled in with silt ending the drains usefulness.  During that dig I also discovered the presence of several sprinkler heads and PVC water lines within the trench making the project even more difficult.  Using a shovel and brute force were out, and using a hand trowel and weeding fork to delicately excavate the trench were in.

Going into springtime, I started looking for a several week window to complete the project.  We normally have a group of 25-30 people over for a Bible study twice a month, but when one of the dates fell on Fathers Day and couldn’t be moved, it gave me a one month gap in our schedule where having our backyard torn up and in shambles wouldn’t be a problem.  The project window had presented itself and I jumped on the chance.  The morning after homegroup I started the slow and steady archeological 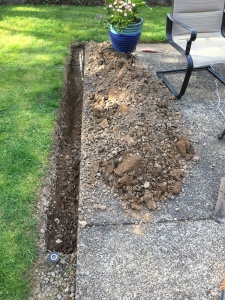 excavation of the existing drain.  The only problem was I had no idea where the drain lines ran to carry the water to an outlet on the street.  My only solution was to continue excavating and see what I would find.  In the first week digging out the gravel and pipe next to the patio there were no surprises, but as I started into the second week, there were plenty.  There was an unexpected drain line that ran to the neighbors fence, complete with a clean out that had been buried under six inches of soil.   The drain line that ran down towards the street had another clean out that was buried under four inches of soil.  And at the other end of the patio was a completely different drain pipe that had been laid directly into the soil and was broken in several places.  I had planned to add a drain line to that side of the patio and had questioned how I was going to connect the new line to a drain, but to my delight, the very end of the broken drain line was intact and did in fact connect to an existing drain.  By the end of the second week, I had finished digging out the trenches for the new drain lines, pulled all of the old pipe out of the ground, and  was ready to start installing the new drain.

On a run to Home Depot, we returned with 100 feet of drain pipe, 100 feet of drainage fabric, and several pipe connectors.  With the boys now out of school, I explained to them that the sooner we got this project finished, the sooner we could start on our fun summer stuff – biking, backpacking, swimming and the like.  They helped me lay in the fabric and piece together the new drain pipe.  The next day a delivery truck dumped two yards of
drainage rock in our driveway, and we set to work filling the drain with the rock – two five gallon buckets of rock at a time.  This time around we made sure to completely seal the drain with the drainage fabric to prevent soil from clogging the drain like the last one.  As I sit here towards the end of the third week, we are completely done with half the trench.  We have one last week to lay the final sections of pipe, use up the rock pile in the driveway, take a large pile of trash to the dump, and hose everything down before our next homegroup.

As I tested the completed sections of pipe earlier today, I was elated with how well it worked – quickly draining all of the water from a hose on full blast.  I’m hopeful that all of the hours of backbreaking work (aka chiropractor job security) will make a significant difference to our previously soggy lawn when the rains return in a few short months.  It feels good to get such a large project off the list and have the satisfaction that it was done right.  But as with any homeowner, the completion of this project marks the beginning of another – getting ready to have the entire exterior of the house painted in three weeks…

If you enjoyed our story and think your friends would like it, we would love for you to share it using one of the buttons below.  If you want to stay up to date with all of my writings, travels and personal stories, you can follow me on Facebook, Twitter and Instagram at divergentjoel.

joel Writer about growing up overseas @ www.adivergentlife.com Traveler of Oregon and beyond @ www.divergentexplorers.com
Published June 23, 2017

One thought on “DIWhy: Replacing the French Drain”